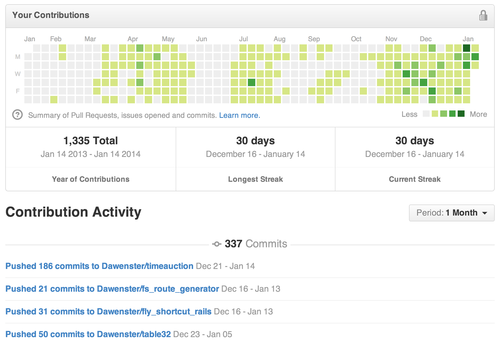 Apparently I like to code.  For the past 30 days I have committed and pushed code to GitHub.  Some days more (51 commits) some days less (3 commits).

To be honest, there have probably been longer streaks - the blank periods in the graph can all be explained.  Before March, I didn’t know how to code (pushed a few things as part of a tutorial).  In June, I did contract work for LegalReach, which is under a private repo.  From August to November, I was working full time at AxiomZen, on the Twenty20 product, which is also under a private repo.

The commits that you can see are on all sorts of different projects - a piece of contract work for some ex colleagues, re-architecting FlyShortcut, a 3-day hackathon, updates to JustSayWen, TO Tablets stuff, a yet-to-be-reveiled project with my friend Kevin, and my favourite - remaking Time Auction, the demo of which is now live at TimeAuction.org.

I’d love to keep going.  Really.  Coding has become part of my daily routine.  It’s common that I dream of code.  It’s the weirdest thing.  I’ll dream of getting stuck on a problem that doesn’t exist, dream of solving it, and waking not having a clue what happened, only that I solved something and it felt good.

Actually, come to think of it, that’s probably how I think about the problems I work on while awake.  In the thick of it, I think, “Why can’t I solve this?!  This is SO important!”  And when I solve it, I think, “…was that really worth an hour and a couple handfuls of hair?  What did I solve again?  Oh ya, I was able to use callbacks to create nested has-many objects while reloading the factory sequence so that I can cleanly test my model methods - something that nobody will ever see”.

I’m off to Asia for three weeks.  When I get back I’ll be hitting the ground running on the business side of Time Auction, so I may start dreaming about things other than coding.  Which is why I got into coding in the first place - to build a business.  Perhaps I’ll start living my dreams.

David Wen
Entrepreneur, software developer, management consultant. He climbed Mt. Fuji on four hours of sleep.Subscribe to his musings.
Read next
A little treat
When a puppy does something wrong, everyone is familiar with the training methods of saying no, spraying water, or raising your voice. And when...
2 min read ⋅ Jan 11, 2014